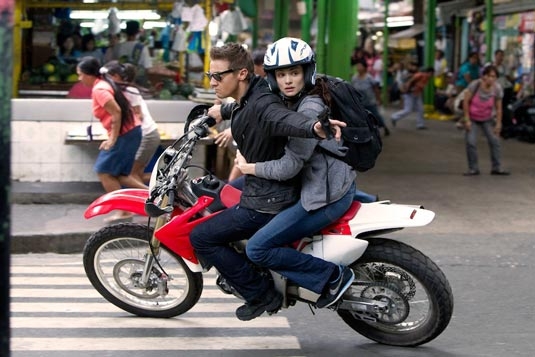 We meet genetically enhanced assassin Aaron Cross (Jeremy Renner) as he survives the Alaskan wilderness. Meanwhile, CIA bigwigs shout across tables at Edward Norton, who runs the whole super-assassin program, which is so secret that the CIA doesn’t know about it, or even how he got in the building.

Jeremy survives the wilderness a bit more. Edward has more meetings. Because Jason Bourne has gone rogue, and he needs to shut the program down. By killing everyone involved in dramatic, public ways, as obviously this will draw less attention.

Geneticist Rachel Weisz is one of those targeted, but Aaron saves her and they’re soon on the run. At some point, off camera, they must get the Bourne trilogy out on DVD to see how he did it, because this film offers nothing new, and much less character development. Renner and Weisz are good, though. 7/10