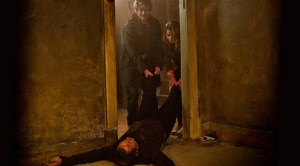 The King is Dead!

Max and Therese move into a suburban house. They’re nice. There are nice neighbours… on one side. On the other is the drug-fried, weak-willed King (Gary Waddell, perfect), whose house is used by his aggressive, ice-fuelled ‘friends’ for all-night parties.

Max and Therese get burgled – twice – and the cops aren’t much help, so they plot ways to get their peace back. So far, so ‘relatable’, as the Americans say. At (long, long,) long last, M&T take action.

I respect writer/director Rolf de Heer (Bad Boy Bubby, Ten Canoes) , but I get annoyed when indie filmmakers try to make ‘mainstream’ movies without studying their rules. Clear protagonist, internal goal, strong antagonist, stakes, urgency. And genre: this is a little bit black comedy, a little bit thriller and a little bit Neighbours. C’mon, Rolf de Harris: do you know what it is yet?

A good premise let down by a sluggish and messy plot.