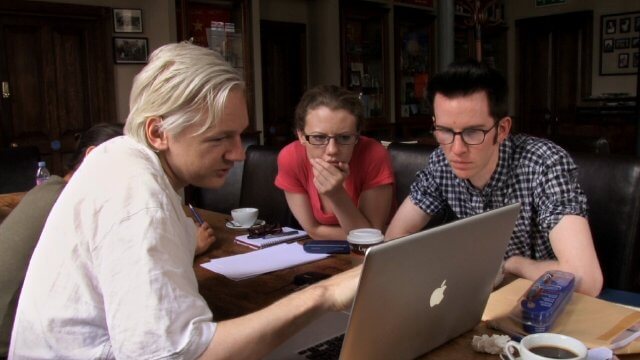 We Steal Secrets: The Story of  WikiLeaks

In case you’ve been in Guantanamo Bay with a bag over your head for the past year or two, Julian Assange is avoiding extradition to Sweden, where he’s accused of less-than-consensual sex with two women. Was that a CIA set-up? Assange was an easy target, having supposedly fathered at least four children around the world. Then again, this film portrays a man with a megalomaniac streak who may well have ripped a condom in two when refused unprotected sex.

The third possibility, of course, is that he simply ejaculates like a fire hose. We may never know.

The interview with one of the Swedish accusers, who seems very credible, is the most interesting part of Alex Gibney’s over-long documentary investigating these issues, earlier history and the story of Bradley Manning, who provided the Leaks for Julian’s Wiki. It covers pretty familiar ground and interview subjects, though notably not Assange himself. 6/10

Released July 4, 2013, and during the Sydney Film festival.

Jonathan’s TV pilot script Chrome was nominated for an AWGIE in 2010, and his feature script Leonardo’s War reached the top 30 of the 2012 Nicholl Fellowships competition.[/box]