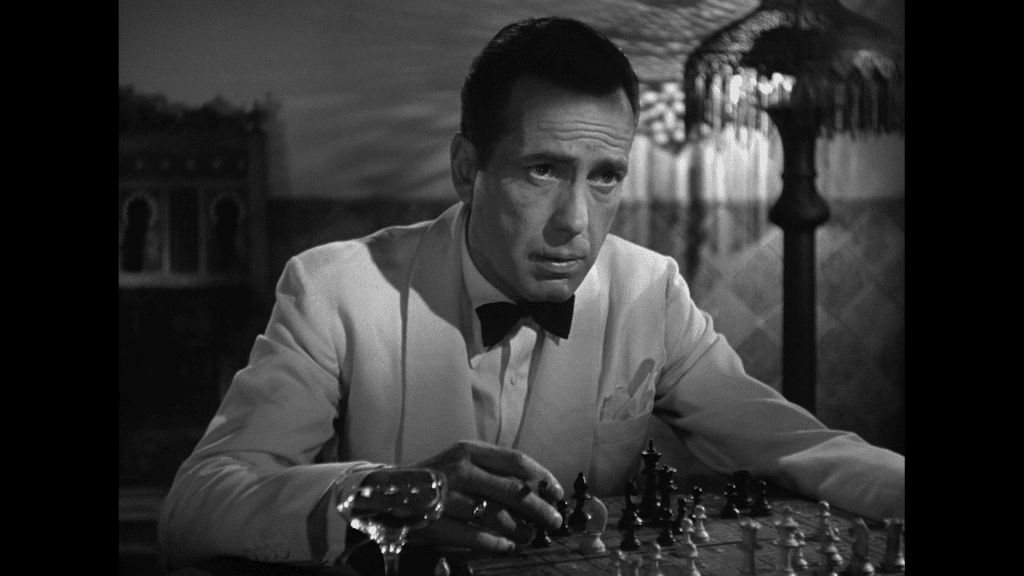 Last week, at my local cinema, I had the privilege of seeing a digital restoration of the classic film Casablanca. I’ve seen it a million times, but this was my first time seeing it in a theater. It was just as awesome as you’d imagine.

A million authors have written about the genius of Julius K. Epstein, Philip G. Epstein and Howard Koch‘s screenplay; over 75 years it has become an ingrained part of cinema history and culture. Though its influence on today’s popular culture has waned, for screenwriters, it’s an enduring touchstone for lessons in screenwriting. Which is what got me thinking – what did I learn from Casablanca this time?

That’s the yardstick when you want to know how to judge a person’s character. Watch what they do, not what they say. It’s one of the Golden Rules of screenwriting, too. It’s the backbone of what makes a character feel relatable and realistic to an audience.

So when I look at Humphrey Bogart‘s character, Rick Blaine, in Casablanca, what kind of person do I see at the beginning of the film? Is he a ‘changed man’ by the end? Do his actions support this, or just his words? Let’s look at the evidence.

Rick is described as cynical by Ugarte (Peter Lorre) in the beginning of the movie. More than once we hear Rick himself say, “I stick my neck out for no one.” By the end of the film though, Rick seems a changed man. I stick my head out for nobody

He sacrifices his own happiness for that of his former flame, Ilsa (Ingrid Bergman), so she and her husband, WWII resistance leader Victor Laszlo (Paul Heinrid) can escape the Nazis and continue leading the movement from the safer shores of the US.

That seems like a pretty cut-and-dried character arc. Rick goes from selfish and cynical, to hopeful and selfless. Job done. Arc complete.

But did he really? Was his inner transformation as a person really that profound? I don’t think it was. I think this guy was just bitter because he got his heart broken, but that heartbreak didn’t really change who he was on the inside, despite what he told others.

That’s why Lazslo comments that Rick sounds like someone who’s “trying to convince themselves of something he doesn’t really believe” when Rick professes to be motivated solely by self interest. The evidence is in his actions throughout the movie:

Captain Renault is right – Rick is really a “rank sentimentalist”, so I think we can say that the change he achieves is more of a simple but very relatable kind: he gets over his broken heart. When confronted with Lazslo’s selflessness, Rick realizes he’s just being spiteful because Ilsa deserted him in Paris to be with a man who is a better version of himself. Any man’s ego would be wounded by that.

He’s also confronted with Ilsa’s selflessness. Remember the young Bulgarian wife who slept with Captain Renault to get the visas? That was a minor but important B-plot that foreshadowed and built sympathy of Ilsa. She asks Lazslo indirectly if he could forgive her for doing such a thing, and he indirectly says yes.

Rick recognizes this when she claims to still be in love with him. It’s what he’s always dreamed of, having Ilsa back in his arms, but he knows what she’s doing. My God, between Lazslo and Ilsa, how could Rick not feel like a heel for hanging on to those letters of transit!

The Beginning Of A Beautiful Friendship

Being the good guy that we know he really is, he decides enough is enough; a little closure has helped heal his broken heart and he can do the right thing – he let’s Ilsa go with Lazslo to America.

I’ll never forget the impact that final moment of goodbye between Rick and Ilsa had on me the first dozen times I saw the film. Rick’s heroic sacrifice pulls at your heartstrings, but when you examine his change of heart in context, you see why this is such an enduring masterpiece of a film. Rick’s change was something we could all recognize from our lives.

We’ve all had our hearts broken and eventually gotten over it, but how many of us have done it for such a noble reason? We like to think we could, that’s why we love heroes like Rick.

2 thoughts on “Screenwriter At The Movies: Casablanca (1942)”