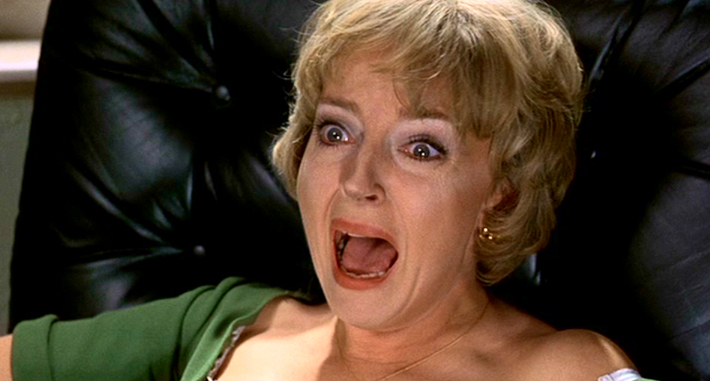 After all, Hitchcock’s greatest successes were his American movies starring Cary Grant and Jimmy Stewart. Yet, there’s something freshly unique and authentic about his British period that I found lacking in the American films. To me some of the English films had a greater sense of realism

In my view, Hitchcock delivered his last true master piece with the film that brought him back to England in 1972: Frenzy. I agree with Roger Ebert, when he writes

“FRENZY is a return to old forms by the master of suspense, whose newer forms have pleased movie critics but not his public. This is the kind of thriller Hitchcock was making in the 1940s”

At the most exciting moment in this movie, Hitchcock does something highly illegal… He breaks the rule of not showing a key dramatic story moment.

At the most exciting moment in this movie,
Hitchcock does something highly illegal…

When the Coen brothers allowed the tragic climax of No Country For Old Men to unfold offscreen, a large part of the audience hated them for it. I was among them. Not only did I feel robbed of a character we had come to love over the course of the movie, I also felt robbed of what could have been a powerful dramatic scene.

In Frenzy, Alfred Hitchcock uses a similar technique – but it works a treat.

We see the killer and his next victim enter a house, climb the stairs to an apartment on the second floor. Once at the top, instead of staying with them, the camera retreats down the stairs and back onto the street. For a moment, nothing happens and we are left with the merchants and trades people outside. Only later in the film do we get to see the aftermath of the murder.

Why did it work?

Some purists claim you can’t do this or that in movies: no voice over, no flashbacks, no out-of-POV-scenes. The truth is that you can do anything you like – provided you do it well… (even killing off your heroine halfway a movie).

In Frenzy, the offscreen tragedy is not the movie’s climax but the Mid Point. I tend to believe that some of the story’s key dramatic scenes belong on screen, such as the Inciting Incident, the Act One and the Act Three Climax. In any case, all the major events that involve the hero character should be on the screen.

In the scene above however, it is not the protagonist but the antagonist who disappears off screen. Another good example that proves we need to be aware of who’s point of view the scene is told from, before making structural judgments. If the main character had been part of the offscreen action, the same trick would most likely not have worked as well as it does here.

By the way, Brian De Palma did something vaguely similar around the mid point of The Untouchables. I wonder who he might have learned it from…